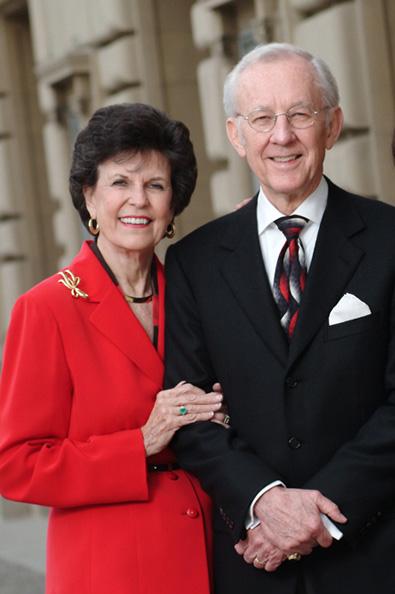 It was a quiet Sunday evening at the Brehm household in McLean, Virginia, in 2000. Dee Brehm was preparing dinner when her husband, Bill, walked into the kitchen and asked what he could do to help. With the quiet intensity of a woman who had been monitoring her blood sugar for 50 years, Dee turned around, looked at Bill, and said, "You can find a cure." Bill paused for a moment, and then replied simply, "Okay . . ."

“I don’t know why I said it,” Dee says today. “But that kitchen conversation changed the direction of our lives.” Dee knows that her husband takes no challenge lightly.

Dee has given herself over 100,000 insulin injections and has tested her blood over 70,000 times. However, she is actually fortunate; there are only about 500 people in the nation known to have survived type 1 diabetes for as long as she. Moreover, only about half of those have survived without the complications that typically accompany type 1, and Dee is in that favored group. But, like all who depend on daily insulin injections, she lives with the constant fear of low blood sugars that can develop without warning.

Married for more than half a century and as deeply in love as when they met as college students, Bill and Dee Brehm have been blessed by interesting careers, wide interests, and the joys of parenthood and grandparenthood. However, laced into that tapestry is a clear propensity to seek out the difficult challenges, and to see them through.

As a graduate student in mathematics and physics at Michigan in the early 1950s, Bill Brehm was already aware of the power of analytical thought to create and to lead change. His part-time job in weapons systems development at the University's Willow Run Aeronautical Research Center so interested him that he sought a full-time University appointment to learn more about the emerging field of systems analysis. Moreover, Bill saw the potential of combining systems analysis with information science as a means for making major improvements in both management and engineering research. Indeed, the project to which he had been assigned-the development of a command & control system for continental air defenseled to the design and application of the first largescale digital computers.

Bill was convinced that this was just the beginning. He knew that computer systems were destined to become ubiquitous and to offer great improvements in capability and productivity. However, he also could see that investments in computer hardware and technology — unless accompanied by clear headed analysis of objectives and missions and an understanding of requirements and leadership needs at all levels — could lead to costly program failures. And he knew that the price of failure would be measured not just in wasted dollars, but also in the loss of precious time and opportunity.

Bill’s systems work at Willow Run led him to pursue a career in national security. Thus, when he and Dee were married in 1952, he set forth upon more than a decade of defense systems work in San Diego. It was a rich experience as he saw his chosen field blossom into an important and shaping discipline in systems development and management. In 1964 Bill concluded that he should take his turn in public service where he could continue to learn and to put his developing skills to work. He was offered an opportunity to do so in the Department of Defense. He served first on the staff of Secretary of Defense Robert McNamara, working under the leadership of Alain Enthoven and Russell Murray II, two outstanding scientists who had firmly established the role of the systems approach in defense programming. That eventually led Bill to subcabinet level appointments under Presidents Lyndon Johnson, Richard Nixon, and Gerald Ford, concluding with four years as an assistant defense secretary under James Schlesinger and Donald Rumsfeld.

In ten years of public service, Bill found systems analysis applications in virtually every aspect of Defense management. As Bill says, “Systems analysis is a way of thinking; it is a way of looking at the world, overlooking nothing, and bringing the best of science, experience, and philosophy to bear.” Quoting Robert McNamara, he says, "When you approach a problem, you must start with the universe. Make sure that everything adds to 100%."

Gradually, the systems approach to problem solving found application in fields well beyond the military. And, as expected, it fueled the developments in information technology and connectivity that have changed the world. Thus, it was not surprising that upon leaving government Bill should follow his instincts to start a new enterprise devoted to assisting government officials tackle the tough problems of government that he knew would yield to the systematic application of analysis and information science. So in 1978 he helped found SRA International, Inc, a company providing a full range of systems analysis and integration services to clients across the government.

With this background in mind, it is not difficult to understand how Bill is approaching the challenge that Dee Brehm issued to him — to find a cure for type 1 diabetes.

Dee and Bill have invested financial resources, their time, and energy to create a new paradigm for the enterprise that is the search for the cure and prevention of type 1 diabetes and its complications. This enterprise includes research, of course, However, research is only a part of the enterprise universe; the rest comprises many administrative and management tasks that, together with discovery, make up the total effort along the tough and complex road from lab bench to the drug counter. Because no one has yet defined that enterprise, it presents fertile ground for analysis and greater understanding, and for more effective use of modern information science. Bill believes that improving the enterprise viewed in its totality offers the true opportunity for quickening the pace of the search for a cure, and not just for diabetes.

At the University of Michigan, Bill has already demonstrated his willingness not only to bring a sizable portion of his financial resources to this challenge, but to accompany his philanthropy with the kind of energy, forward thinking, and fevor that have been the fabric of his career. In March 2006, he organized an unusual two-day event on the U-M medical campus — a gathering of 90 persons for what Bill characterized as a “Charrette,” a term usually applied to architectural forums. The Charrette brough Michigan faculty, scientists, and administrators together with leading diabetes researchers, managers, and advocates from other institutions in academia, industry, and government. Their purposes were two: First, to explore the fundamental question of how to accelerate the pace of the enterprise; and, second, how to build an international coalition of research institutions and scientists who will collaborate to move type 1 diabetes therapy beyond its exogenous insulin dependency — the only therapy it has known for 83 years.

On December 9, 1949, Dr. Jerome Conn, then the Michigan Medical School endocrinology chief, diagnosed Dee with type 1 diabetes. In 1952, when he learned that Dee and Bill were engaged, he called the couple together to give them an honest appraisal of their future together. His prognosis was grim on four points: Dee would probably not have children, she would not escape the debilitating and painful complications of diabetes, she would not have a normal life expectancy, and — whatever that life span would be — she would have diabetes for all of it. Well, Dee and Bill have two children, and six grandchildren, she is free of complications, and she has already enjoyed a long life and has expectations for many more years.

So, Dee has proven Dr. Conn wrong on three of his four points. Now Dee and Bill have set out to prove him wrong on the fourth one — that she will not have diabetes for all of her life.

On November 22, 2004, the University of Michigan Health System announced Bill and Dee's extraordinary gift: $44 million to work toward a cure for type 1 diabetes.

©2022 Regents of the University of Michigan | Disclaimer | Privacy Statement | Nondiscrimination Policy
Produced by Michigan Creative, a unit of the Office of the Vice President for Communications